Home / Nordic History broken down
Next

Viking Symbols & Meanings: The Helm of Awe & the Story of Fáfnir

The Helm of Awe is from amongst the most famous symbols central to Viking history and Nordic mythology. Additionally, you may hear it being referred to as the Helm of Terror. In Old Norse, it is actually known as Ægishjálmr, which is pronounced “EYE-gis-hiowlm-er”. This name stems from the Nordic God Aegir ﻿meaning Sea in Old Norse who was a jötunn, a kind of being that is known commonly as a Frost Giant. Aegir was the Sea God in the realm of Jötunheimr or Udgard.

The Helm of Awe consists of either four, six, or eight arms extending out of a central sphere as if to guard the core. The tridents can be either curved or straight as there are a few different versions of the Helm all used for the same purpose.

As for the Helm of Awe as a symbol, its mention comes first in the Poetic Edda, it's story of origin being incredibly fascinating and quite detailed as well. It's emergence story cannot be discussed without discussing two characters known famously amongst all those who are interested in Norse mythology: Sigurd and Fáfnir.

In the Poetic Edda, in the chapter of Fáfnismál page 174, comes the tale of Fafnir who originally wears the symbol. The original Old Norse reads:

The translation of the above-mentioned would be:

The Helm of Awe
An Ægishjalm I bore among the sons of men,
while I o'er the treasures lay ;
stronger than all I thought myself to be;
stronger I found not many!

Fáfnir, which is actually fɑːvnɪʐ in Old Norse, is mentioned in the Völsunga saga as a dwarf who was known to be incredibly powerful and entirely fearless. He had two other brothers, Otr and Reginn, and was tasked with guarding their father, the sorcerer Hreidmar's, house of gold.

As the legend goes, Nordic Gods Odin, Loki and Thor were out traveling one day and came across an otter which they skinned. As they carried on with their travels, they came across the home of Hreidmar, the father of Fáfnir. While they were visiting, they revealed to Hreidmar the pelt of the otter they had skinned earlier in the day. Hreidmar, with great horror, recognized his son Ótr immediately. According to the Prose Edda, Ótr could change his form into whatever he liked and would mostly take on the form of an otter in the day. Unfortunately the Nordic Gods had not known any better and ended up killing him for his skin. Hreidmar demanded compensation for his great loss, initially asking a life for a life. The one to actually kill Ótr was Loki and then Odin and Thor had helped him skin the otter. So Loki's life was sought for revenge.

However the Gods argued that they had not known that this wasn't simply an otter and that the killing was thus a mistake. Eventually Hreidmar agreed to then accept wealth as compensation. He demanded that Ótr's skin must be filled with gold coins and that the outside be covered with red gold.

In order to make this payment, Loki stole from the dwarf Andvari who had an entire hoard of treasure. Loki trapped the dwarf and stole his treasure as well as a ring that was called Andvaranaut. This ring was magical and allowed the owner to find more gold in order to keep increasing their wealth. But when Loki stole it, Andvari placed a curse upon the ring, destining the owner of it to death. Now that it fell into the hands of Hreidmar, it was him who would become the victim of the magical ring's curse.

Satisfied with the gold that was a blood debt for his son, Hreidmar let the Gods go on their way, keeping the cursed gold for himself, oblivious to the harm that would befall him. Eventually, Hreidmar's other son Fáfnir became greedy and ended up killing his own father in order to attain the grand treasure. Thus fulfilling the curse of the ring which has now come into his possession.

In order to guard his fortune, Fáfnir took on the shape of a dragon, wearing a helmet, The helm of Awe, in order to strike fear into any who dared come too near to his treasure. And thus would he protect his greed against many who attempted against him, yet the only one to succeed was a young boy named Sigurd.

Sigurd was actually the foster son of Regin who was Fáfnir's brother. In order to avenge his father, Regin instigated Sigurd against Fafnir the mighty dragon.

The Elder Edda of Saemund details how Sigurd manages to defeat Fafnir when many others had failed before him:

Sigurd and Regin went up to Gnitaheid, and there found Fafnir's slot, or track, along which he crawled to the water. There on the way Sigurd made a large pit, and went down into it. When Fafnir crawled from the gold he blew forth venom, but it flew over Sigurd's head. When Fafnir crept over the pit, Sigurd with his sword pierced him to the heart. 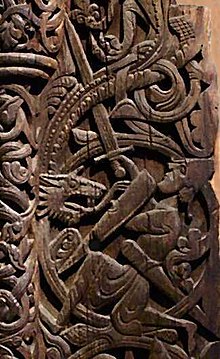 This image belonging to John Erling Blad is from the Hylestad Stave Church (around the 12th century) showing Sigurd slay Fafnir.

When Sigurd was informed of the curse that had been placed upon the gold that Fafnir guarded, he replied by saying all men were meant to die anyway so might as well enjoy the successes in the pursuit of wealth which is common to all men.

Use & Significance in Viking Age

The Vikings took much inspiration from the Helm of Awe and both warriors and women would wear the symbol in order to inspire fear into their enemies. The fear is likened to that of a serpent, causing its prey to freeze with fear upon locking its eyes with the dangerous being. Viking warriors would draw the symbol on the inside of their helmets or on the outside depending on how they interpreted the awe the Helm was meant to inspire.

While some believe the symbol causes fear to rise within the enemy upon seeing it, others claim that the symbol grants the bearer such strength and might that they can overcome the enemy themselves.

How we make the symbol live on

At Heimdalls workshop, we believe there's much of Norse culture and indeed Viking culture that is worthy of preservation and continuation. In the story of Fafnir and the Helm of Awe, there is much that should be carried forward and we strive hard to do so. The fight against oppression and greed must continue until the end of times. When Fafnir told Sigurd about the Ægishjalm, believing it should've protected him against Sigurd as well, Sigurd responded by saying that the helm would not protect against those who were urged by righteous anger. That is to say, the Helm of Awe will only protect those who deserve protection. It will only grant strength to those fighting a worthy cause against oppressors and those who wrongfully hoard wealth through deceit.

Also in Nordic History broken down

The Story of Sleipnir's Birth and Beyond

Join now to get 10% off your first order and exclusive notifications of launches and re-stock.

All images brought to you by Heimdall's Workshop, a subsidiary of Tanger Brands Limited LLC.

This is not part of, or endorsed by Google, Snapchat, Twitter or any other social media platform in any way. YOUTUBE and GOOGLE are trademarks of GOOGLE, LLC.